THE DEFENCE OF BELGIUM

There are many and varied reasons why World War I started. One of the reasons was the neutrality of Belgium. We sometimes forget how much of a role the Belgian army played in World War I.

After the revolution of 1830 Belgium became a neutral state, the independence of which was guaranteed by the great powers of the day France, Great Britain, Prussia, Austria and Russia. This was formalized with the Treaty of London (1839). The treaty was an important document, especially in the role it played in bringing about World War I.  The German Chancellor Theobold von Bethman Hollweg could not believe that Britain and Germany would go to war over a mere “scrap of paper”.

Defending the entire Belgium territory was seen as hopeless for the small Belgian army less than 200,000 in 1914. So, in about 1850 the idea of building a national redoubt was suggested, for political, economic and military reasons Antwerp was chosen. In 1859, the buildings of a number of forts was started, a ring of eight forts were built, the defence of Antwerp would be completed by flooding area's to the north, east and south of the town. But the development of artillery in the second half of the 19th century caused increases in range, precision and effect.  It was decided in 1870 the forts were to be modified and more forts built further afield.  By 1906, a law was passed and money made available resulting in the extension of the port and the enlargement of the fortress. Eleven new forts were built and twelve new redoubts, as a rule there was a fort every five kilometres with a redoubt between each fort.

The forts were constructed with fifteen feet concrete roof on twelve feet concrete walls, and the whole fort was then covered with twelve feet of soil. The main armament was two six inch guns fitted in a turret, two four inch howitzers in two turrets and four three inch guns in four turrets, for close support the fort had a number of two inch guns around the fort.

The work started in May 1908 by July 1913 the garrisons were in place but the guns did not arrive until December 1913. After they were installed, the first target practice took place in February 1914.

On August the 4th 1914 War was declared at that time a number of forts had equipment still missing searchlights, ventilator, telephones electric power etc.

After the battle of Liege from the 5th August till the 16th August, (this battle delayed the invasion of France by the Germans for up to four to five days), the Belgian field army then retired to the national redoubt of Antwerp. On the 4th September the Germans troops made a surprise attack on Antwerp but they were only supported by light artillery, the forts withstood the attack. After the battle of the Marne 5th September till the 12th September the Germans attacked Antwerp again on the 22nd of September. This time they brought up some siege artillery the attack lasted two to three days, and under this bombardment some of the forts were silenced.

On October 10th fearing a bombardment of Antwerp the forts surrendered. The defence of Liege and Antwerp for up to ten weeks delayed the Germans, they used up troops and equipment that could have been used elsewhere.

The battle of the Yser took place from the 16th October till the 30th October along a twenty two mile stretch of the Yser river and canal from Nieuwpoort in the north to Diksmuide in the south. It was held by a large force of Belgians, some sixty five thousand troops with support of some French divisions, and at sea the British assembled a naval force under the command of Admiral Horace Hood. This comprised of three monitors H.M.S. Severn, H.M.S. Humber and H.M.S. Mersey and other assorted craft to provide heavy artillery support from the seaward flank. 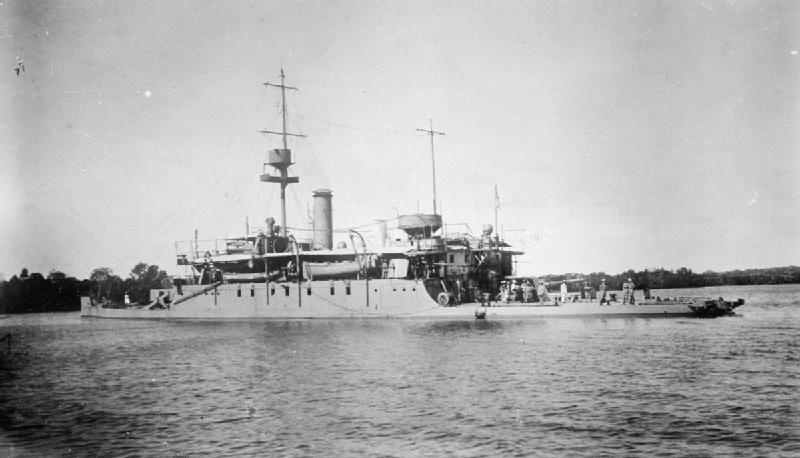 The first German attack was at Diksmuide on the16th of October.  After heavy fighting, the Germans attacked on the18th of October along the whole front from Nieuwpoort south down towards Arras trying to break the allied armies. From the 26th to the 29th October, the Belgians flooded the whole of their front line. The Germans launched another large attack on the 30th of October but realized they could be cut off by the flooding, they withdrew. The fighting continued further south on what we now call the first battle of Ypres 19th October till the 22nd November.

The German army failed to defeat the Belgian army and the retention of this last corner of Belgium ended the race to the sea. The Yser front line was held by the Belgians with little movement until 1918.

Britain played a small role in the defence of Antwerp, in that after the visit on the 2nd till the 4th of October by the First Lord of the Admiralty Winston Churchill he ordered in the Naval Division.

The Naval Division was formed in August 1914. The Admiralty realized that with mobilization they would have between 20,000 to 80,000 men of the reserve, for whom there would not be room on any warship.  This surplus would be sufficient to form two naval brigades and a brigade of marines available for home defence or for any special purpose. From this they formed the “Naval” division.

The Royal Marine Bde (became the 3rd Bde, RMA, Chatham, Portsmouth, Plymouth Bns) landed at Ostend on the 27th August 1914. The other two Bdes were formed at Walmer and Betteshanger at that time. The Royal Marine Bde returned from Ostend on the 31st August 1914 and re-embarked for Dunkirk on the 19th September 1914.  They reached Cassel on the 30th September 1914 and detrained at Antwerp on the 3rd October 1914.

Antwerp’s outer forts were taken by this time and the Bde were put in the trenches immediately. The two other Bdes (1st &2nd RN Bdes) embarked from Dover 4th October 1914 landed at Dunkirk, detrained at Antwerp 6th October1914 and joined the RM Bde in the trenches. The whole Division was withdrawn on 9th October 1914 to St Gilles Wass and began entraining for Ostend, except for about 1,500 men of the 1st RN Bde, who failed to cross the Scheldt river in time and crossed into Holland and were interned for the rest of the war. 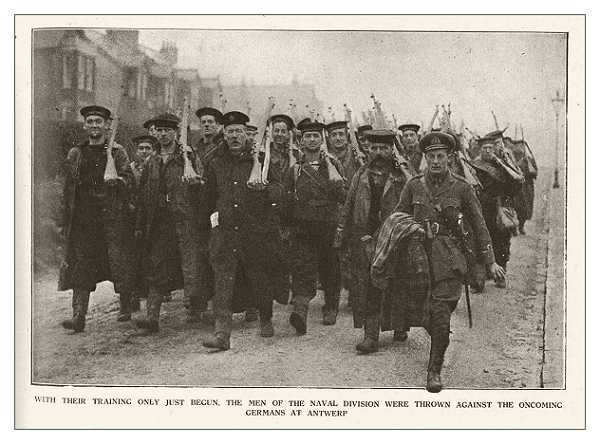