Tom was born C1890 and was one of at least seven children of John and Elizabeth Britton. At the time of the 1901 Census, the family was living in Greenfield Place, Rathmines, and by 1911 he was living in a boarding house in Francis Street, Dublin.

Sometime after this he emigrated to Australia and was working as a farm hand when on 24 February, 1916, he joined the Australian Army at West Maitland, NSW. He was posted to the 34th Battalion and was one of the first reinforcements to land in France, arriving on 21 November, 1916, by which time he was promoted to Corporal. He was wounded twice in two days when taking part in some small skirmishes against German positions, on the 24th February, 1917; he was wounded slightly but was discharged from the field ambulance that day. The next day, he was wounded again, only this time more seriously, and he was sent to hospital where he remained until the 2nd March, 1917.

At the end of May – beginning of June 1917, he was sent to an Officer training camp at Oxford, and didn’t return to the battalion until mid-December, thereby missing the battalion’s first major operation at the battle of Messines and also the horrendous battle of Passchendaele.

In the spring of 1918, the Germans launched their final push to try and break the Allies lines. The 34th was subsequently deployed near and around Villers-Bretonnuex (VB) to defend the approach to Amiens. Tom took part in the counter-attack at Hangard Wood on 30 March and assisted in the defeat of a major German attack on VB on April 4th.

It was during this period that Tom was awarded the Military Cross.

For conspicuous gallantry and devotion to duty in leading his platoon in an attack in the face of heavy machine-gun and rifle fire. He inflicted many casualties on the enemy and captured two machine guns. Later he organised a party, and, in face of heavy fire, brought in all dead and wounded. By his splendid example of courage he helped to carry the assault to a successful issue. 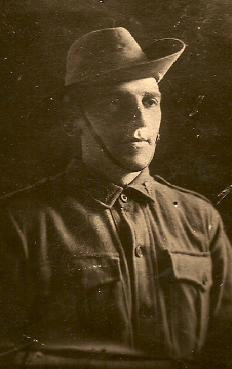 Unfortunately, on 2 June Tom was walking with two American officers along the reserve system of trenches in the vicinity of the Villiers switch, when he was hit in the ankle with fragments of a 5.9 ground shrapnel. He was taken first to the Dressing Station (11 Field Ambulance) and then on to the 5 Casualty Clearing Station and finally to the 8 General Hospital at Rouen, where septicaemia set in and he passed away on 21 June.

He was buried the following day in the St. Sever Cemetery, Rouen.

As well as the Military Cross, he was also entitled to the British War & Victory Medals. 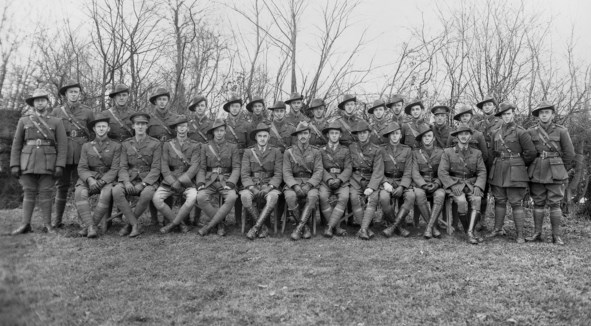 Officers of the 34 Battalion at Meteren, France, 12 January, 1918. Thomas is third from the left, back row.

1. On his attestation papers Thomas stated that he was born in the parish of Black Hill, near the town of Dublin.