He was part of the “contemptible little army" being among the first of the British Expeditionary Force in France, when he landed on 18 August 1914. He died on 20 July 1916, from wounds received during the Battle of the Somme, aged thirty eight. 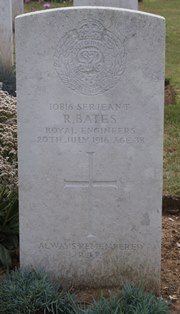 He was entitled to the 1914 Star and the British War & Victory Medals and is buried in Dantzig Alley British Cemetery, Mametz, France.