Nothing is known of John’s early life, however, we know from his entry on the CWGC ‘Debt of Honour’ that he served in the South African (Boer) War. I have only been able to find records for one J. O’Loan that served in that conflict: he was Private 1731 J. O’Loan, 1 Inniskilling Fusiliers, and it would seem likely therefore that it was one and the same man.

The next thing we know for certain is that in the last quarter of 1905 John married Margaret McFadden. At the time of the 1911 census the family (John, Margaret, John & Eliza (John’s step children) and Margaret’s Mother) were living in Abbey St, Omagh, Co. Tyrone, and John was working as a bricklayer’s labourer.

When war was declared the 1 Royal Inniskillings were stationed in India, recalled, they arrived at Avonmouth on 10 January, 1915. Given his previous service, it would be fair to assume that John was called up as a reservist and presumably joined up with the battalion on their return. The battalion, now part of 87 Brigade in the 29 Division, moved to Rugby before setting sail to Egypt on 17 March.

On 25 April the battalions task was to land at X Beach (Cape Helles), following an initial assault by the Royal Fusiliers, and to consolidate the beachhead at the top of the cliffs. They landed without difficulty and advanced about 650 yards inland. They were then ordered to dig in, even though opposition was light, in order to make a general advance in conjunction with units from the other landing beaches. However, this delay proved disastrous, as Turkish resistance soon stiffened, and the general advance, three days later, made only limited progress, after which every yard gained, was a hard and bloody slog.

John survived almost two months on the peninsula but was then wounded, and passed away on 20 June.

John is buried in the Lancashire Landing Cemetery and was entitled to the 1915 Star and the British War & Victory Medals. 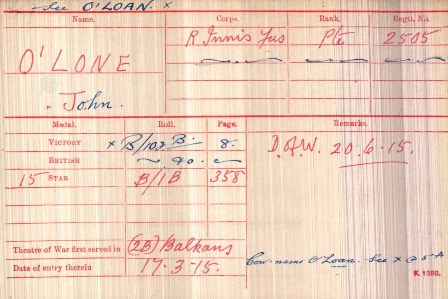 As stated, John’s entry on the CWGC ‘Debt of Honour’ says that he served in the South African (Boer) War,   I have only been able to find records for one J. O’Loan that served in that conflict, it would seem likely therefore that it was the same man: he was Private 1731 J. O’Loan 1 Inniskilling Fusiliers and he was entitled to the Queens South Africa Medal, with Orange Free State, Natal and Belfast Clasps & the Kings South Africa Medal, with 1901 & 1902 Clasps.

The Orange Free State and Natal Clasps were ‘State Clasps’:

The Belfast Clasp was a ‘Battle Clasp’: