Nothing concrete is known about William prior to the outbreak of war other than the fact that he got married,(2) and even what we know from the outbreak of the war is precious little.(3)

His Battalion, 1 Royal Dublin Fusiliers, were one of the first ashore on the peninsula on 25 April, on 30 April, having suffered horrendous casualties they were merged with the surviving members of the 1 Royal Munster Fusiliers, who had been equally decimated in the preceding five days.

While this had been happening, William was still on his way to the area. His Medal Index Card records that he entered the Balkans War Theatre on 13 May, 1915. The 1 Royal Dublin and 1 Royal Munster Fusiliers, resumed their separate identities on 19 May, following the arrival of replacements, and so this is presumably when William joined up with the battalion. Almost two months later to the day, 18 July, 1915, William is reported to have died of wounds. 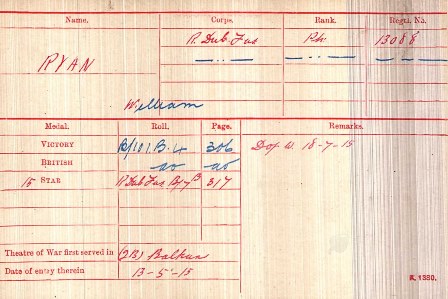 William was entitled to the 1915 Star and the British War and Victory medals. He has no known grave and is remembered on the Helles Memorial.