Geoffrey was the son of H. E. and Catherine Girard, his birth was registered in Cheshire in the September quarter of 1899, when he was named as Erskine Girard. In the 1901 Census, on which he was named as Geoffrey M. E. Girard, he was living with his Mother and elder sister in Bedford, and in the 1911 Census he was listed as being a visitor at a house in Hammersmith, London, with no mention of his Mother or sister and with no apparent connection to the head of the household.

Although  only fourteen, if that, when war broke out it would seem that he must have joined up quite quickly, his Medal Index Card (MIC) shows that he was with the 28 London Regiment (Artists Rifles) when he landed in France on 9 May 1915. 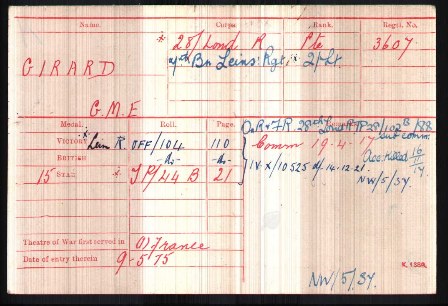 His MIC also states that almost two years later on 19 April, 1917, he was commissioned as an officer, although this was not announced in the London Gazette until 26 October, 1917, when the date of his commission was given as 26 April.

The War diary of the 7 Leinster Regiment shows that 2 Lt. Girard reported for duty with the battalion, in the field, on 26 June, 1917.

On 1 November, the battalion was at Durrow Camp and in the evening of the following day they relieved the Connaught Rangers at the front line. Over the next fourteen days the War Diary reports that there were several quite days with nothing much to report, with some shelling on the others days, during this period two men were killed and 4 wounded.

16th Under the most unfortunate circumstances 2nd Lt. G. M. E. Girard accidently met his death whilst firing a rifle in the front line.

17th The funeral of the above officer took place at 1.30pm in the presence of the C.O., the Adjt. and several other officers; the Rev. Fr. Rafter SJ MC officiating.

Geoffrey is buried in Croisilles Railway Cemetery, approximately eight miles south east of Arras. He was entitled to the 1914-15 Star and the British War and Victory Medals, these were claimed by his Father in July, 1919.