Almost nothing is known about Joseph, the Commonwealth War Graves Commission ‘Debt of Honour’ does not have any details of his age or next of kin, the ‘Soldiers Died in the Great War’ database tells us that he was born and enlisted in Dublin. His name is on a memorial that was originally in St. Mathias Church, (COI) Dublin, this church closed in 1956, when the memorial was moved to Christ Church (COI) in Leeson Park.

The 1911 British Census does show a Joseph Dodd, aged 18 and born in Dublin, in the 2 Battalion, Royal Irish Rifles. If this is the same man, there are no records of when he transferred to the 1 Battalion.

What we do know is that along with the rest of the battalion, Joseph landed in Le Havre on 6 November, 1914, and that he was killed in action, just ten days later on 16 November.

The battalion diary  has a block booking for the period 15th to 21 November 1914:

In trenches at Rue Tilloy.

'Baptism of fire in this war.

Usual sniping and "A" Company suffered from the fire from HE shell.

Joseph has no known grave and is remembered on the Le Touret Memorial to the Missing, just over half a mile from Le Touret village in the Pas de Calais.

He was entitled to the 1914 Star with Clasp, and the British War & Victory Medals. 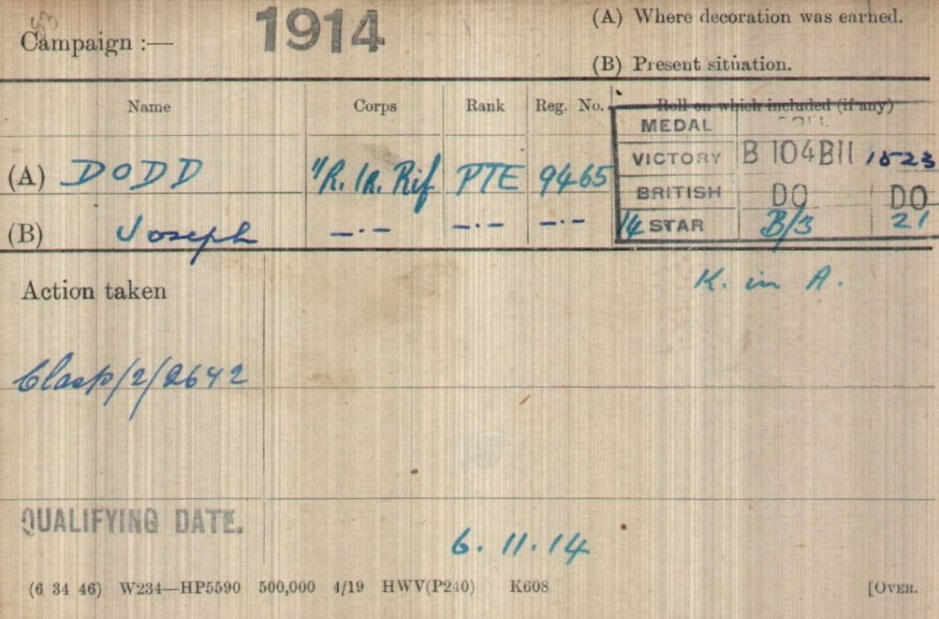