Percy Netterville Gerrard was born in Rathfarnham, Dublin, on 9 August, 1870, the son of Thomas and Elizabeth Gerrard.

He was one of the first pupils of Mr. Strangways Grammar School at St. Stephens Green and was subsequently educated at Sherborne School, Dorset, and then in Hanover, Germany. He graduated from Trinity College, where he obtained the degrees of M.D., B.Ch. and B.A.O. He was also a Licentiate of Midwifery of the Rotunda Hospital, and a pupil of the Royal City of Dublin Hospital, in which he acted as house surgeon for a time.

He married Alice Edith Scott in late 1896; in 1897 he was appointed District Surgeon at Kuala Lumpur, in the Federated Malay States, and later that year, on 13 August, a son, Thomas Francis Netterville Gerrard was born. (1)  Sadly Alice passed away, and by the time of the Irish Census of 1901, Thomas was living in Dublin with his Grandmother. Several years later Percy remarried, this time to a nursing sister, Clare Hoffman.

When war broke out the Yorkshire Light Infantry had been withdrawn from Singapore and replaced in October, 1914, by the Indian Army’s 5 Light Infantry Regiment, which unusually for this time was an entirely Muslim unit.

At the same time, Percy, a Captain in the Malay States Volunteer Rifles, was sent to Singapore, where it seems he was appointed as Commandant of the Prisoner of War Camp. The 309 Germans, including crew members from the German Light Cruiser, SMS Emden, were being held at Tanglin Barracks, where there was also an ammunition store.

At the end of January it was announced that the regiment was to move to Hong Kong, but rumours began that they were to be sent to Europe or even to Turkey, where they would have to fight Turkish Muslims.  Poor communication between the men and their officers, slack discipline and a weak leadership, meant that the troops' were disaffected, and propaganda from the Ghadar Party in India, campaigning for Indian independence from British rule, further disaffected the troops stationed in Singapore, as did the Fatwa issued by the Sultan of Turkey which urged all Muslims to oppose the British. On top of this a pro-Turkey Gujarati coffee-shop owner, Kassim Mansur, visited the men and together with Nur Alum Shah, a religious leader, Mansur instilled anti-British feelings and told them it was their religious duty to rise up against the British.

When the final order to leave Singapore arrived in February 1915, Three Indian officers, Subedar Dunde Khan, Jemedar Christi Khan, and Jemedar Ali Khan and other ring-leaders decided that it was time to rebel. On the morning of 15 February a farewell parade of the regiment was held without any mention that Hong Kong was to be the destination.

At 3:30 pm on the afternoon of the same day, four of the eight companies making up the 5th Light Infantry with 100 men of the Malay States Guides Mule Battery mutinied and two British officers of the regiment were killed as they attempted to restore order. The mutineers divided themselves into three groups, one of which, containing a 100 men, went to obtain ammunition from Tanglin Barracks. The mutineers fired on the camp guards and officers without warning, killing ten British guards, three Johore troops present in the camp and one German internee. Three British and one German wounded survived the attack as did eight Royal Army Medical Corps personnel in the camp hospital, including one who managed to escape under heavy fire to raise the alarm. The mutineers tried to persuade the Germans to join them, but only thirty five were prepared to go with them, the rest many of whom were shaken by the sudden violence were reluctant to do so and remained in the barracks.

Presumably it was in this action at Tanglin Barracks that Percy was killed, one report I have seen suggests that he was killed because he refused to hand over the keys to the ammunition store. While he may well have refused to hand over the keys, judging by other reports of what took place in the mutiny, it would appear that being British would have been in itself enough to get him shot.

Other mutineers went on a killing spree at Keppel Harbour and Pasir Panjang, killing 18 European and local civilians. Martial law was imposed and marines from HMS Cadmus went ashore to join with British, Malay and Chinese Volunteer units and the small number of British regular troops forming part of the garrison. British Vice-Admiral Sir Martyn Jerram sent a radio message requesting help from any allied warships nearby.

A group of mutineers laid siege to the bungalow of the commanding officer of the 5th Light Infantry, Lieutenant-Colonel E. V. Martin, which effectively blocked the route into Singapore Town. Colonel Martin and a detachment of the hastily mobilised Malay States Volunteer Rifles held out through the night of the 15th, under sporadic fire.  With daylight the defenders were successful in retaking the regimental barracks but the action cost one killed and five wounded. The mutineers scattered, and despite sniper fire the general population stayed calm while the volunteers, sailors and marines fought sporadic skirmishes with the mutineers.

On 17 February, French, Russian and Japanese ships arrived; the allies' marines were immediately mobilised, and advanced on the mutineers. A fierce battle ensued in which many of the mutineers were killed or wounded. Lacking strong leadership, the mutiny started to lose direction – a large number of the mutineers surrendered immediately, and the rest scattered into the jungles, to wage a sniping war on the allies. On 20 February, companies of the 1st/4th Bn. King's Shropshire Light Infantry (Territorials) arrived from Rangoon, to relieve the sailors and the marines and they succeeded in quickly rounding up the last of the mutineers.

The only casualty figures I have been able to find state that 47 British (33 military & 14 civilians), 1 French and 3 Russians were killed in the mutiny.(2)  No figures are available for the number of mutineers killed during the mutiny, however, 47 of them were executed after a court-martial. 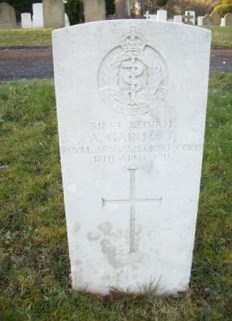 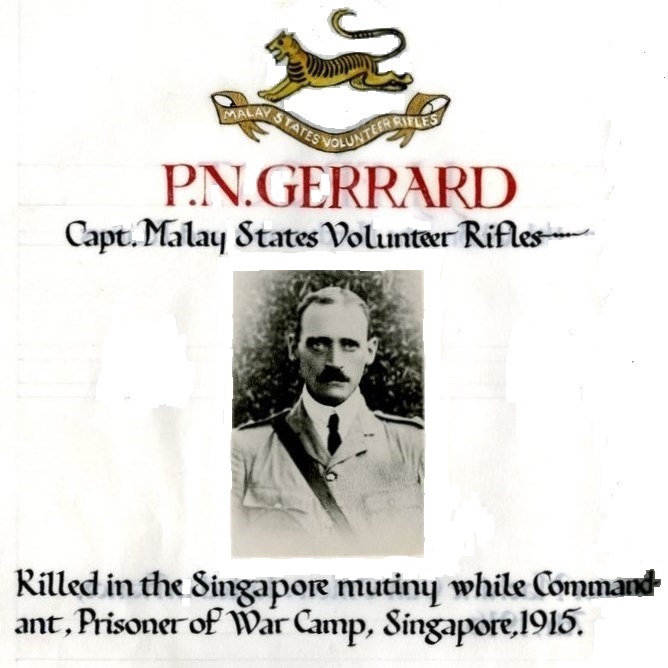 (1) Thomas Francis Netterville Gerrard was a WW1 Air Ace, flying with A Squadron RNAS, 1 Squadron RNAS & 208 Squadron RAF; he was credited with ten victories and was awarded the DCM and Croix de Guerre. He remained in the RAF after the war and was killed in India on 14 July, 1923, when he fell from his mount in a Polo match.

(2) This figure does not appear to include the 3 Johore soldiers or the German Internee that were also killed at Tanglin Barracks on 15 February.